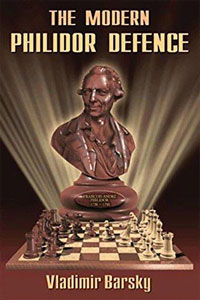 The modern Philidor Defence is a very solid and strategically rich
opening, in which there arise various pawn-structures. Some of them
are typical for other entirely different openings like the Sicilian Defence, the Ruy Lopez and even the King’s Indian Defence. I hope that the Philidor Defence will become a reliable weapon for you against aggressive players who begin the game with a move with their king’s pawn. After the contemporary move-order it is practically impossible to avoid this opening, moreover that in our book we deal thoroughly with all possible attempts by White to avoid the main lines as early ason move three!

The Philidor Defence is not so difficult to learn and there are not
many forced lines. The book consists of seven chapters, devoted to different move-orders. Each chapter comprises of a “Quick Repertoire”,thoroughly analyzed theoretical lines in the part “Step by Step” and“Complete Games”. At the beginning, it would be sufficient for you to have a look at the surveys and to see the games and that would not taketoo much of your time. After that you can test bravely the new opening in short games at your club, or on the Internet. After you have played about 10-15 games in the Philidor Defence, have a look at the part “Step by Step” and compare your play with the recommendations of the author. It may be possible that you would like to introduce corrections in a part of your actions.