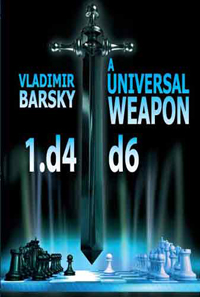 In this book, in the one volume, I have analyzed two original, and in fact quite distinct, opening schemes:1.d4 d6 2.c4 e5 and 1.d4 d6 2.Nf3 Bg4. They are encountered in practice quite frequently (there are more than a thousand games with each in the database), but strangely enough the first of these schemes does not have an established official
name. The second variation has been referred to by various names –sometimes the Tartakower-Wade system, or the Hodgson variation.Bothsystems can be characterized by White’s first move,Black’s response, and the somewhat disdainful attitude shown towards them by
the chess theoreticians.