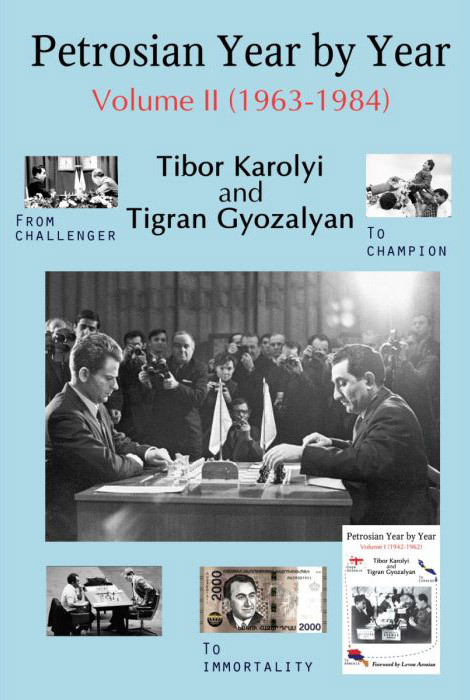 Libro en inglés International Master Tibor Karolyi and FIDE Master Tigran Gyozalyan have written a comprehensive two-volume treatise on the life and games of Tigran Petrosian, who was world champion from 1963-1969. The present Volume II takes the reader on a journey from Tigran’s victory in the 1963 world title match against Mikhail Botvinnik, when he firmly established himself as the best player in the world, through his next two title matches against Boris Spassky in 1966 and 1969 and subsequent candidates matches against Bobby Fischer, Victor Korchnoi and other world-class players of the era. It covers all his tournaments and matches of the second half of his career, ending with his final games in 1983. Karolyi and Gyozalyan provide deep modern analysis of 175 full games and fragments, and summarise almost all known games played by Petrosian in the period. They also provide considerable background colour on each game, with round-by-round analysis of tournaments and matches in which they were played. Many of these games have not previously been analysed in detail in modern books, and those that were have nevertheless been subjected to considerably improved analysis. Petrosian’s opponents in Volume II include world champions and challengers Kasparov, Karpov, Fischer, Spassky, Tal, Smyslov, Botvinnik, Korchnoi, and Bronstein, as well as leading players such as Timman, Larsen, Reshevsky, Beliavsky, Polugaevsky, Portisch, Romanishin, and many others. There is a special focus on his coaches Suetin and Zaitsev. An added bonus is the inclusion of rare photos taken from private collections in Georgia and Armenia, many of which have never before been published in the West.