My first book of checkmate 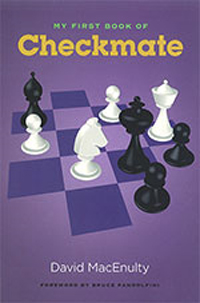 My first book of checkmate

Many checkmates fall into recognizable patterns. My First Book of Checkmate presents all the basic patterns in clear diagrams, provides simple puzzles to get you started, and then takes you on a fascinating and rewarding journey through the beautiful and brilliant world of checkmate. By the time you finish this book you will be well prepared both to see danger before it strikes, and to deliver the crushing blows that win games.

David MacEnulty is an award winning teacher with over twenty years of experience teaching children and adults. His chess teams have won numerous New York City, New York State and National Chess Championships. He has won several Teacher of the Year awards, was named Chess Educator of the Year by the University of Texas at Dallas, received the Lifetime Achievement Award from the US Chess Federation, and was given the Lives that Make a Difference Award from A&E Television. The film, Knights of the South Bronx, starring Ted Danson, was based on David’s years as a chess teacher at C.E.S. 70 in the Bronx.