My first book of checkmate WORKBOOK 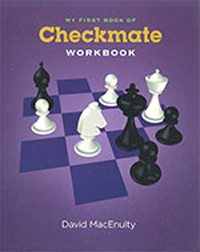 My first book of checkmate WORKBOOK

You have no doubt heard the saying that practice makes perfect. Actually, practice makes permanent. If you practice badly, you will perform badly. It is practice in the pursuit of perfection that leads to better performance. Accurate practice is the essential ingredient in achieving success in any complex endeavor. With almost 300 checkmate exercises, My First Book of Checkmate Workbook offers the opportunity for accurate practice at the all-important task of finding checkmate.

Beginning with the simplest checkmate patterns, this this companion of My First Book of Checkmate proceeds gradually and methodically through ever more complex puzzles until you are solving problems that can take four, five or six moves to unfold. This is truly practice that will lead to perfection in the exciting field of checkmate.


David MacEnulty is an award winning teacher with over twenty years of experience teaching children and adults. His chess teams have won numerous New York City, New York State and National Chess Championships. He has won several Teacher of the Year awards, was named Chess Educator of the Year by the University of Texas at Dallas, received the Lifetime Achievement Award from the US Chess Federation, and was given the Lives that Make a Difference Award from A&E Television. The film, Knights of the South Bronx, starring Ted Danson, was based on David’s years as a chess teacher at C.E.S. 70 in the Bronx.