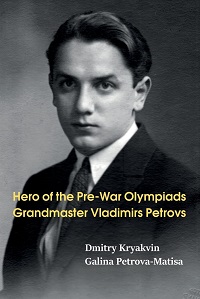 Our short life together was fun, fascinating and happy. I accompanied my husband to chess tournaments. We traveled a lot, saw a lot, met the most interesting people. Meeting Alekhine, Euwe, Flohr, Capablanca, Keres was unforgettable. We became friends with many of them. Now, when I turn the pages of my life and remember my family, which was obliterated so ruthlessly, the old wounds open again and start bleeding.
This book tells the story of one of the most enigmatic and tragic figures in chess history – the Latvian grandmaster Vladimirs Petrovs (1908 – 1943). His name was struck out of chess literature for decades. His games and biography are largely unknown to the public – even though Petrovs defeated Alekhine, Fine, Reshevsky, Boleslavsky and many other great players of the past, gained prizes at supertournaments including joint first at the famous Kemeri 1937 tournament, and performed strongly for Latvia at chess Olympiads. According to the Chessmetrics website, Petrovs was ranked no. 14 in the world in November 1938, and his performance at Kemeri 1937 was 2709. He had a 2.5-2.5 lifetime score against Alekhine.
In the first part of this book, grandmaster and chess historian Dmitry Kryakvin instructively analyzes Petrovs’ career through 52 games and fragments. As well as the above players, opponents include Smyslov, Euwe, Bogoljubov, Keres, Stahlberg, Flohr, Spielmann, and many other global stars of pre-war chess. In the second part, Petrovs’ widow Galina Petrova-Matisa recounts the tragic fate of her husband and family members and her search for the truth of what happened to Petrovs. She further provides biographical details of their short, blissful family life for four-and-a-half years, including unforgettable meetings with the world’s strongest chess players and their families. The work contains a large number of rare family and tournament photos