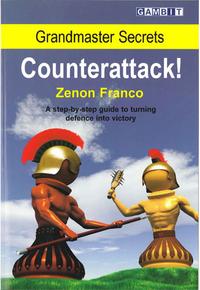 Superb defensive technique is a hallmark of all great chess-players.

With a few deft counterstrokes, they not only deflect what looked like an overwhelming offensive, but also expose the darker side of their opponent's build-up.

Is this sheer black magic, or are these skills that ordinary players can develop?

While some of the key defensive skills follow well-established principles, modern players ally this with an appreciation of chess dynamics that is a good deal more subtle.

Zenon Franco provides a wide-ranging course in how to handle difficult positions, seeking not only to hold them together but to go on the counteroffensive, exploiting to the full the commitments and concessions the opponent has made to launch his attack.
The methods he advocates are varied: often a countersacrifice is the key, while simplification can also employed as a subtler, but equally deadly weapon.

Zenon Franco is a grandmaster from Paraguay who now lives in Spain. He is an experienced chess trainer, his most notable pupil being Paco Vallejo, now one of the world's top grandmasters, whom he taught from 1995 to 1999.