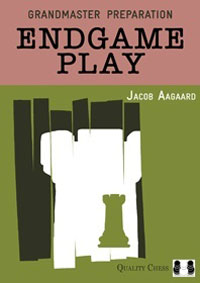 Jacob Aagaard presents the reader with a few key concepts in the endgame and invites him to test his skills with a lot of examples from recent tournament practice. Where many endgame books are theoretical and emphasize memorization, Endgame Play is based entirely in the real world, where the ability to react precisely in technical positions is a life skill.

I strongly believe in training by solving exercises and Jacob Aagaard is a real master here. I often train my own students using the books from his Grandmaster Preparation series, and they really help on the way to becoming an International Master or hopefully even a Grandmaster.

With Endgame Play Jacob Aagaard has again proved convincingly that he is indeed one of the best chess authors of modern times."

From the Foreword by GM Karsten Müller

Grandmaster Jacob Aagaard won the British and the Scottish Championships at his first and only attempt. He is the only author to have won the Boleslavsky Medal as well as the ACP, Guardian, ECF and ChessCafe Book of the Year awards. He is a FIDE Senior Trainer and trains grandmasters from four continents. His training material is used by amateurs, grandmasters and World Champions alike.

The Grandmaster Preparation series is aimed at ambitious players.