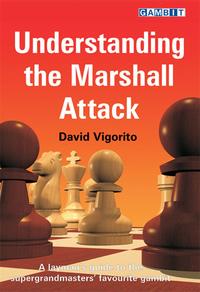 The Marshall Attack is a chess opening like no other. Rather than subjecting himself to the 'Spanish torture' so typical in the Ruy Lopez, Black simply gives away a centre pawn. But in return, he gets long-term attacking chances and activity that can persist well into the endgame.

It is almost a century since Frank Marshall invented his sensational gambit, but it is still controversial, and more popular than ever amongst the best players in the world. In their hands, the Marshall Attack looks remarkably solid - even if White neutralizes Black's attacking chances and remains a pawn up, Black often achieves full positional compensation.

However, the Marshall appears a forbidding opening to ordinary club players, who feel that the theory is too difficult to understand and much too complex to memorize. Many simply avoid it with both colours. That, argues David Vigorito, is a shame. He shows that many typical Marshall positions can be broken down into elements that we can all grasp, and so build up an intuition to guide us. Then we are able to tackle this incredible opening and develop a feel for why pieces go to the squares that they do, and when Black has sufficient compensation, and when he does not.

Of course, the Marshall remains a highly sharp and concrete opening, even to those who are versed in its unique brand of black magic. Vigorito provides detailed, cutting-edge theoretical coverage of all its main lines and the most important Anti-Marshall systems.

David Vigorito is an International Master from the United States. He plays regularly in high-level competitions, including the US Championship. He has written extensively for a variety of publications and is a chess teacher.