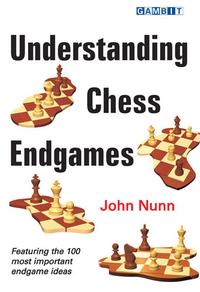 One of the world's foremost chess writers provides everything you need to know about chess endgames!

Assuming no specialized endgame knowledge, John Nunn presents 100 key endgame concepts, and explains how they are used to win games or save difficult positions.

He covers all the main types of endgames and typical thinking methods, and so equips readers with all the skills needed to excel in this vital phase of the game up to good club level and beyond.

The endgame is the stage of the game where precision is most important, and where errors are punished most drastically.

It is also deceptive: many endgame positions look too simple to require prior knowledge, but yet contain fiendish concealed pitfalls that can reverse the result of the game on the spot.

Some key positions simply have to be memorized, as they can hardly be worked out at the board, especially when playing with today's faster time-controls.

In such perilous terrain, an expert guide is necessary. From his wealth of endgame expertise, John Nunn has distilled a course of fundamental knowledge that is highly targeted on practical success for all levels of players.

Dr John Nunn is one of the best-respected figures in world chess. He was among the world's leading grandmasters for nearly twenty years, winning four gold medals in chess Olympiads and finishing sixth overall in the World Cup in 1989. He is a much-acclaimed writer, whose works have won 'Book of the Year' awards in several countries.