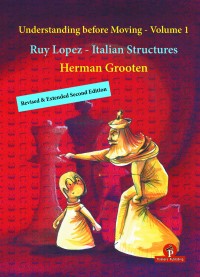 Volume 1 in a new series by Herman Grooten

A wild and original idea does not often turn out to be a successful concept. This is true not only for chess itself, but also for a chess writer's practice. Nevertheless, we believe that the fundamental concept behind this book is one that will prove very valuable to average club player.

As a trainer of both youth and adult players I look at many games of my students. I noticed many of them had enough knowledge of the opening at their disposal. Yet as soon as the opponent deviated from theory, they were groping in the dark. Because how should the game continue?

This book series is about that central question: what matters in the opening? What plans are on hand? Which (hidden) concepts are concealed in the current position that has arisen just after the opening?