U Cannot Be Serious! 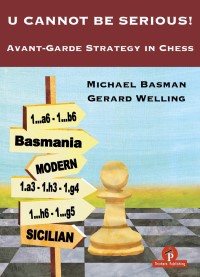 U Cannot Be Serious!

Libro en inglés. Este libro está escrito con la intención de introducir al lector en las creativas ideas de Michael Basman. Abandonó el ajedrez de torneo en el cambio de milenio, para concentrar sus energías en el desarrollo de una escuela de ajedrez. Y esto es por lo que es conocido actualmente. This book is written with the intention to introduce the reader to the creative chess ideas of Michael Basman. He gave up more intense regular tournament chess around the turn of the millennium, to concentrate his energy on the development of school chess. And that is what he is mainly known for in recent times, as the motor who made the UK Chess Challenge blossom. Nowadays the yearly nation-wide school competition still attracts around 40,000 children, and that is not even the record. […] What will this book present you? First of all a more elaborate picture of Michael Basman’s chess, based on my experiences with this creative master. We played together in two early tournaments around 1980, and (especially in the second one) we discussed the ideas which has given me a clearer idea of the man’s way of chess thinking than before – because the multiple outright rejections in the past and on the net are clear proof that it is not so easy to understand new and creative ideas. These two tournaments, the Biel Masters in 1979 and the Liege Open in 1981 will be presented in separate reports of the events, focusing on the games of the hero of this book, from my point of view.