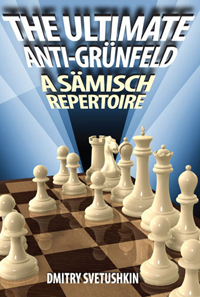 By playing 1.d4 Nf6 2.c4 g6 3.f3, White kills three birds with one shot. First of all, this is a natural way of seizing space. The second merit of 3.f3 is that it throws the Grünfeld fans out of their main repertoire. The third point is that it allows White to delay the development of his queen’s knight. While in most systems its natural stand is on c3, against ...c5 plans it may go to d2 or a3, leaving c3 free for the other knight. Of course, Black can also choose the King’s Indian. Then the Sämisch is probably the most straightforward and natural answer. White’s result in this particular branch (without 3.Nc3) is above 60%! Higher than any other system against the K.I.D.

GM Dmitry Svetushkin is one of the best Moldovan players. His current rating is 2608. He learned chess at 5, at 12 he was already winning national championships for kids. Svetushkin played in 6 Olympiads and at the last one scored "+6" - an all-time record for his team. He works a lot with V.Bologan and coaches young talents.