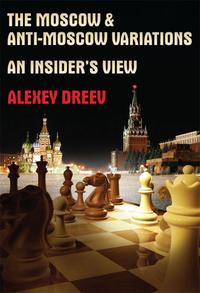 Dreev is a leading expert on opening theory. The Moscow Variation and the Anti-Moscow Gambit are his “trademark” systems.

The part of the book, which deals with the analysis of the plans and possibilities in the much calmer Moscow variation can be compared to a thorough guide of the series “street by street”.

The positions in the Anti-Moscow variation are much more dynamic and complicated and the task to analyze absolutely all the situations is presently impossible. Still, I have tried to deal with practically all really important variations.

The most fashionable positions have been extensively analyzed and I have given some recommendations, which have not been tested in practice yet (..)

The Moscow variation and the Anti-Moscow variation are an integral part of the opening armour of practically all the best chess players in the world (Some of them even play it for both sides...).

Among the super-experts who play it with Black, it would be sufficient to name Viswanathan Anand, Vassily Ivanchuk, Boris Gelfand, Levon Aronian, Peter Leko, Peter Svidler, Sergey Karjakin and they all have contributed considerably to the development of its theory.

Garry Kasparov has contributed immensely to the theory of both systems.

The author of this book has been playing both variations with Black for many years, including at the very top-level and often quite successfully. The results of my analyses (..), as well as my calculations during the games have laid the foundation of this book.

I hope that it will be useful for the chess players at all levels, even for these who just begin to study the theory of the opening (The book deals thoroughly with the standard plans and ideas for both sides on the basis of general chess principles and common sense) (..)

The professional chess players (..) will find this book helpful, since there are numerous extensive analyses of the most fashionable lines. I also believe that my numerous theoretical novelties and recommendations will be quite useful for all the readers in their practical games (..)"