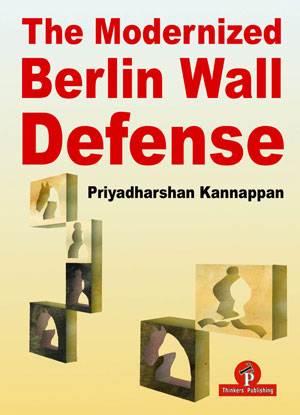 This book’s journey began on the first day of January 2018 when one of my New Year resolutions was to write a chess book. The journey has been very long, but certainly fun, and has in many ways made me understand myself better, both as a person and as a chess player!

If it has taken a long time, you also have to know the distance the book has covered! It has travelled 14,130 km, as the first page was written when I was about to complete my Master’s degree at Webster University in St Louis in the USA, and now, as I write my preface, I am a full-time chess trainer, currently living in Bengaluru, India.

So how did I fall in love with this beautiful Berlin Defense? In mid-2003, when I was preparing for the World U-10 Championship, I found that my Philidor Defense wasn’t good enough to be played in a tournament of such stature, and my coach at the time, IM Raja Ravi Sekhar, suggested the Berlin to me as it was at the peak of its popularity after the 2001 World Championship match between Kasparov and Kramnik.

The Berlin was a good fit for me then, as it didn’t have extensive theory (unlike now!) and the lines given in ECO were simple and easy to remember, which made me very happy, as I never really enjoyed memorizing moves in the opening.

Since then, the Berlin has been my go-to, rain or shine opening against 1.e4, and has given me the chance to play a whole bunch of memorable games against players of all rating levels. An incident that is still fresh in my mind happened in the World U-16 Championship in 2009, when I was paired against an opponent who was 200 points lower rated than me. I was scared to play the Berlin as I thought he might hold me to a draw, but my coach, GM R.B. Ramesh, told me to go and play it confidently, and the result was a 31-move victory!

The Berlin Defense has had a significant impact on my chess career, as it made me a positional player who would happily exchange queens in the firm belief of outplaying his opponents in practical endgames. The Berlin has made me enjoy these endgames and has had a huge impact on my playing style.

When I set out to write this book, I was clear on certain aspects, like keeping the moves simple and giving as much explanation as possible at the critical moments, as I wanted to ensure that someone interested in learning the intricacies of the Berlin doesn’t get swamped by long theoretical lines, but acquires a deeper understanding of the dynamics of the positions. If you manage to grasp the dynamics of these lines, then you can play not just the systems recommended in the book, but also other popular Berlin variations that have not been covered in this book for the Black side.