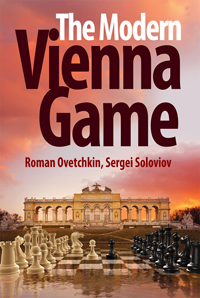 But White prefers to be on the safe side, without burning all the bridges and to try to justify his actions from the point of view of positional play as well.

At first, he deploys his minor pieces to active positions, then he advances the thematic move f4, castles (usually on the kingside) and begins an attack only after all this.

Despite the fact that the move 2.Nc3 has been played for more than a hundred years, there has not been defined a clear-cut scheme for playing this set-up.

IM Sergei Soloviov and Grandmaster Roman Ovetchkin had to make decisions how to play with White practically from the first several moves.

Should he thrust immediately f4, or begin at first with d3? Should he advance his pawn to f5, or prefer a quick piece development? For example, after 2...Nf6 3.Bc4 Bc5, should White play at first d3, fortifying his e4-pawn?

Soloviov and Ovetchkin have come to the conclusion that the move 4.f4!? is more precise.

By choosing the Vienna Game, White follows his own line of playing. This does not happen after the move 2.Nf3 when Black can choose then between the numerous variations of the Ruy Lopez (or the rather solid Steinitz Defence Deferred, or the super-solid Berlin Wall, or the sharp Marshall Attack). In addition, Black can go for the seemingly peaceful Petroff Defence.