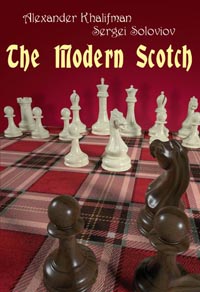 The Scotch Game is the most “open” of all the Open Games. In fact this is the only really Open Game, in its essence, which matches the traditional terminology.

The move 3.d2-d4 breaks immediately the symmetry. White tries to occupy the centre and gain additional space. Rapid contact between the opposing forces takes place, in fact much quicker than in the other open (and not only open...) games, which increases the value of every move and requires from both sides tremendous accuracy at a very early stage of the game. Positions with opposite castles arise much more often in the Scotch than in all the other Open Games put together.

Sergei Soloviov is an IM, author of many books as Boris Spassky's 400 Selected Games, Leko's One Hundred Wins.