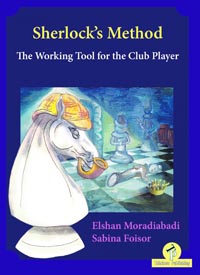 “Their idea in the book is to help players train for tournaments by working on all aspects of the game and looking at problems in a wholesome way. They have a wide variety of topics from a wide variety of players.” ~ GM Magesh Panchanathan

The year was 2001, and I was representing India in the Asian Junior Championship playing against some of the best young talents in Asia. It was the penultimate round, and I was up against this young Iranian player, Elshan Moradiabadi. Our ratings were similar indicating that our playing strengths were about equal. I went in aggressive, but Elshan was able to fend off my attack and push me to the brink of defeat with an extra pawn in a rook and pawn endgame. I had to fight for 81 moves before I could get a draw in that game.When I shook his hand with a sigh of relief, I did not realize that we would be entangled in this long journey of chess playing and teaching together. Over the years, Elshan and I have faced off in several other games against each other. While we both share a great friendship off the board, we have always fought hard over the board. That is how we have always played chess; that is the passion we share for this beautiful game.

I remember watching the US Women’s Championship games live in 2017, and the clear favorite going into the last game was WGM Sabina Foisor. She had to deal with a lot of nerves and was facing an important game against the young and talented Apurva Virkud. I remember following the game closely, and thinking it is never easy for the player in the lead to win such games because they have everything to lose. I did not know Sabina personally at that time, but I was very happy to see that she not only came out with a win, but that she played in style with a nice queen sacrifice in the end. Since then, I have gotten to know Sabina personally, and I can say that she brings the same kind of sincerity and passion to the game of chess. Elshan and Sabina make a great team, just like Sherlock and Watson from their book.

The book covers exactly what it promises to cover; they have a bit of everything in the examples ranging from silent knight maneuvers to fancy sacrifices. Their idea in the book is to help players train for tournaments by working on all aspects of the game and looking at problems in a wholesome way. They have a wide variety of topics from a wide variety of players. For example, there is an exercise of beautiful tactical play by the former World Champion Viswanathan Anand against Super Grandmaster Alexander Grischuk. As you solve the problem and move on, you will see another exercise played by their students rated around 1300. This is a beautiful way to illustrate that chess is chess, no matter who is playing the game. Just a heads-up to the reader, the latter is much harder to crack! Some of the examples like Jeffrey Xiong missing a queen trap or Nihal Sarin missing a simple way to control an open file to gain an advantage show that even the best of the best make mistakes. Even though there may be easy puzzles you can solve in a few minutes or real Titanic’s that take hours to sink in, you must consistently train with them.

In chess, there are two main methods to come up with the best move: one is abstract, think in terms of ideas, and the other is exact, think in terms of moves and variations. In my opinion, this is one of the most difficult skills to acquire — knowing when to think in terms of moves and when to think in terms of ideas. Books usually try to address one or the other, but they do not give us the wholesome picture of the game. As promised in their book, Elshan and Sabina focus on all of this. By mixing the thinking process together, they keep the readers second guessing, and that is a very useful training practice when you are getting ready for an actual tournament. When Ding Liren is playing a game, no one is there to tell him to look for a forcing knight sacrifice to open his opponent’s king rather than thinking about an abstract idea to improve his position. The same applies to Jobava’s brilliant queen retreat to expose the Black king on a weak diagonal. In both cases, once the player found the idea/move, the game was essentially over, but they had to do it in real time.

Adding a nice storyline with Sherlock and Watson adds to the entertainment value of the book; it is a nice way to add fun to the hard chess training that readers are about to endure. By mixing the themes and varying the difficulty level, Elshan and Sabina have found a good training tool for tournament players. Most training methods focus on narrow topics to help familiarize the players with the hope that the sheer amount of work done in that topic will help a player recognize the pattern in a practical game. While learning each topic in depth is an irreplaceable method to study, it is always meant for the longer run, and it is also quite time consuming. The best training that you can do right before a tournament has to be something that can emulate the tournament situation as much as possible. In this book, Elshan and Sabina have catered to that requirement for players.