A cutting-edge repertoire for White based on 3.f3 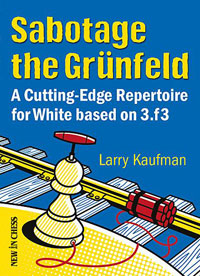 A cutting-edge repertoire for White based on 3.f3

The idea is as clever and original as its inventor. With 3.f3 (after 1.d4 Nf6 2.c4 g6), Alexander Alekhine designed a promising strategy to take Grünfeld players out of their comfort zone.

Alekhine’s find was a great idea in the days of the fourth World Champion and it still is. In fact, its recent revival has opened up a new chapter in chess opening theory. Top players like Vishy Anand and Levon Aronian have used it with success.

The popularity of this variation is easy to understand: it offers White much better chances for an advantage than the normal 3.Nc3 because it makes 3… d5, the favorite reply of Grünfeld players, less attractive.

Sabotage the Grünfeld offers a highly practical repertoire based on 3.f3, covering all of Black’s answers. Larry Kaufman, who has first-hand experience with the variation, has analyzed the lines deeply with the highend computer programs Komodo and Houdini 3.

The ensuing positions are diverse and fresh. White avoids mainstream theory and has a good chance to demolish Black’s position. Kaufman offers a perfect weapon for 1.d4 players who want to steer their game into the direction they want.

With exercises to test your understanding of Kaufman's system.

International Grandmaster Larry Kaufman (1947, USA) became Senior World Champion in 2008. He has been involved in computer chess since 1967, when he worked on ‘MacHack’, the first computer that competed in tournaments with human players. More recently he has been working on the programs Rybka and Komodo. In 2012 he published the chess opening bestseller The Kaufman repertoire for Black and White.