Reinfeld on the Endgame 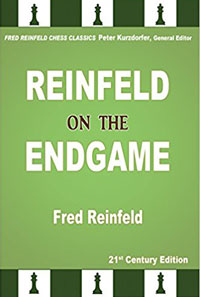 Reinfeld on the Endgame

Reinfeld on the Endgame is a very fine specialty book about several aspects of endgames. It is no giant tome on the entire endgame such as Rubin Fine attempted (Basic Chess Endgames) and Mark Dvoretsky succeeded in producing (Dvoretsky’s Endgame Manuel). Rather, this charming piece concentrates on a very difficult, too-often glossed over aspect of the transition between the middlegame and the endgame. Transition phases are harder to cover than either of the three favorite phases because they don’t fit quite so neatly into the rigid classification that openings, middlegames, and endgames do. But mastering them is essential to those who wish to master or understand the game at a high level.

Each section is introduced with pithy explanations, and each example is shown and then summarized. It all begins with transitions into a favorable endgame, dividing the topic into material or positional advantages. This skill is often known as winning technique, and a good explanation of how it is done is invaluable. Here we get that explanation by one of the most prolific chess writers of the twentieth century.

Next we get into transitions into unfavorable endgames, which can come from compulsion (fatigue, time pressure, etc.); poor choice of which bad endgame to head for; incorrect appraisal of the character of the ending; and disregard of a specific exception to a general principle (the queenside majority is favorable; bishops of opposite colors draw; bishop vs. knight).

The final two sections cover missed opportunities (missing a win; missing a draw; and double oversights) and defending difficult positions (positional and material disadvantages are covered). Transition stages are among the least favorite subjects for chess authors to explore, probably because they are not so easy to buttonhole as opening, middlegame, or endgame positions. But Fred Reinfeld never walked away from a challenge.

Generations of chess players have grown up on Fred Reinfeld’s books. He has a way of reducing the most intricate, complicated positions to their basic components. After Reinfeld explains a chess idea, it makes sense.

He not only taught us how to play the game well, but also implanted in us his enthusiastic passion for learning. His books are peppered throughout with words and phrases in italics to emphasize ideas. Moves are punctuated with single, double, and even triple exclamation marks and question marks to span the entire spectrum of emotions the moves conjure up.

Reinfeld on the Endgame not only covers the poorly studied transition stages between the middlegame and the endgame, it also does so by focusing on everyday misconceptions, tactical oversights, and positional errors chess players, even very strong ones, routinely make. This allows his material to be accessible to players and readers of all strengths, even those with very little knowledge of the game.

He shows us how to exploit several types of advantages (this is known as winning technique) as well as how to avoid unfavorable transitions on one hand and exploit them when handling the favorable side on the other hand. He goes on to the many reasons for missed opportunities as well as how to defend difficult positions in a confident manner.

All these ideas are covered through examples from grandmaster play, and range from going into a poor endgame by choosing one with less chance to succeed through ignorance, fatigue, and time pressure. Some of these choices based on ignorance are particularly illuminating, such as a specific disregard of exceptions to a generally accepted rule: These include the theory that a queenside majority of pawns represents an overall advantage, or that positions with bishops of opposite colors generally leads to a draw.

A standout subject matter throughout is his emphasis on the psychology of error. Understanding why typical mistakes come up again and again is a large portion of the weapons players can use to avoid another repetition, after all.

These twenty-first century editions of Reinfeld’s classics are spruced up with modern algebraic notation and a fresh look by Russell Enterprises Inc. and still retain the power to show today’s readers how to handle the fascinating and limitless world of chess that they did three-quarters of a century ago.