Playing the Najdorf. A Practical Repertoire 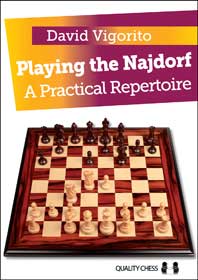 Playing the Najdorf. A Practical Repertoire

The Sicilian Najdorf is one of Black’s best and most combative responses to 1.e4. The Najdorf was championed by Fischer and Kasparov during their respective periods of dominance over the world chess scene, and has been used extensively by many other World Champions and elite GMs, including Anand, Gelfand, Topalov and Vachier-Lagrave to name but a few.

Despite the Najdorf’s obvious pedigree, many players are intimidated by the highly tactical and theoretical nature of some of its main lines. In Playing the Najdorf, IM David Vigorito shows that this need not be a problem, as he offers a complete repertoire for Black based on positional principles, offering sound recommendations which lead to a fighting game without turning the battle into a memory contest.

David Vigorito is an experienced International Master and a respected chess author and coach, who has had the Najdorf as the backbone of his repertoire for most of his career, making him ideally qualified as a guide to this opening.