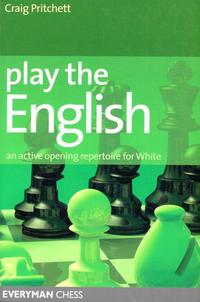 The English is a sophisticated opening which is very popular at all levels of chess: from up-and-coming players to World Champions such as Garry Kasparov and Vladimir Kramnik. It has many attractions, including flexibility and diversity: White can play either aggressively or quietly, and positions are rich in both strategy and tactics.

In Play the English, Craig Pritchett provides an active repertoire for White, offering answers to Black's key defences both in the main lines and sidelines. Drawing upon his wealth of experience in this opening from both sides of the board, Pritchett highlights the positional and tactical ideas for White and Black, and the subtle move-order nuances so important in the modern game.

This book contains all you need to know to play the English with confidence in your own games.

Craig Pritchett is an International Master. Twice Scottish Champion, he has represented his country, four times on top board, in nine Chess Olympiads. He was a longstanding chess correspondent for the Scottish newspaper, The Herald (1972-2006), and recently completed a five year term as Schools Chess Development Director for Chess Scotland (2003-2008). Now active in seniors international chess, he won the gold medal for the best board one performance at the European Seniors Team Championships in 2011