Opening Repertoire: ...c6: Playing the Caro-Kann and Slav as Black 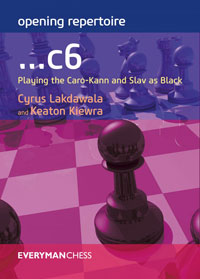 Opening Repertoire: ...c6: Playing the Caro-Kann and Slav as Black

This book provides a rock solid opening repertoire for Black, using systems based on the move ...c6. The backbone of this repertoire is the Caro-Kann versus 1 e4 and the Semi-Slav (via a Slav move order) versus 1 d4. In general these systems aim to neutralise White’s early initiative. They aim for success by the gradual accumulation of small advantages, rather than by emerging victorious from an early tactical melee (which is rather problematic with the black pieces at the best of times).

The book is co-authored by Cyrus Lakdawala and Keaton Kiewra and takes a teacher/student format. The “student” Keaton Kiewra is a very strong international master with two grandmaster norms. He normally specialises in razor-sharp defences such as the Sicilian Dragon and King’s Indian. Now he wants to broaden his style and develop his skills at handling more sedate positions. His “teacher” is Cyrus Lakdawala, an extremely experienced player, coach and author, who guides Keaton along the learning path.

Everything you need to know to defend with Black systems based on ...c6.
The Q and A approach emphasizes plans and strategies.
Written by an expert on the Caro-Kann and Semi-Slav Defences

Cyrus Lakdawala is an International Master, a former National Open and American Open Champion, and a six-time State Champion. He has been teaching chess for over 30 years, and coaches some of the top junior players in the US.

Keaton Kiewra is a strong International Master with two grandmaster norms. He is the current 2016 Southern California Co-Champion and also the manager of the San Diego Surfers PRO Chess League team. He works as a full-time chess instructor and his students have been consistently ranked toward the top of their age group nationally.