Move by move: The Modern Defence 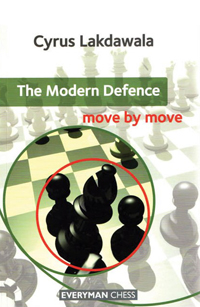 Move by move: The Modern Defence

The Modern Defence (1..g6; against 1.e4, 1.d4, or 1.c4) is an ambitious, counter-attacking choice for Black which can be played against all mainline openings. In typical hypermodern style, Black allows White to occupy the centre and then proceeds to undermine this centre with pawn and piece attacks.
In this book, Cyrus Lakdawala examines the key variations of the Modern Defence after 1.e4, 1.d4 or 1.c4 for White, using 55 key games with extensive explanations in a question and answer format.
He shows how to play Black against White's major attacking options after 1.e4, including the Austrian Attack, Pseudo Dragon, Fianchetto Lines and Classical Systems. Against 1.d4 he recommends the Averbakh Variation with an early ..e5; for Black. He advocates the reversed Closed Sicilian against 1.c4.
Throughout the book Lakdawala shares his experience and knowledge, presents a repertoire for Black and provides answers to all the key questions.
Cyrus Lakdawala is an International Master, a former National Open and American Open Champion, and a six-time State Champion. He has been teaching chess for over 30 years, and coaches some of the top junior players in the USA.