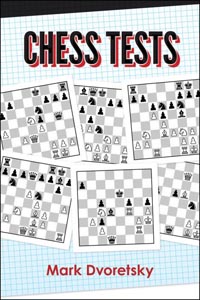 Mark Dvoretsky (1947-2016) is considered one of the greatest chess instructors in the modern era. He left behind a great legacy of many books and publications. At the time of his passing, there were two unpublished manuscripts he had finished (and one other co-authored with study composer Oleg Pervakov).

From the Foreword by Artur Yusupov:
Chess Tests offers chessplayers material of very high quality for working on various themes, from training combinative vision to techniques of realizing advantages. I recommend using those materials for in-depth work in the directions mentioned in the book. If you follow this advice, then this volume will become a valuable addition to your chess studies and will help you reinforce skills and knowledge you have already obtained.

And here is probably the most important point. Dvoretsky wanted to write a book that would not only teach some intricacies of chess, but would also be simply a pleasure to read for aficionados of the game, so he tried to amass the ‘tastiest’ of examples here. I hope that this last book by him is going to achieve this, presenting its readers with many chess discoveries and joy of communication with the great coach and author.