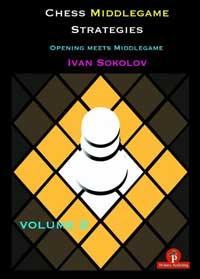 After his outstanding book from 2008, 'Winning Chess Middlegames', Grandmaster Ivan Sokolov takes us a step further into his dungeon of middlegame skills. In his well known style, Sokolov focuses on the different aspects of the complex middlegame.

In modern chess practice, the theory of the opening often stretches into the middlegame, sometimes quite deeply. When players choose particular opening variations, they are in essence deciding on the type of middlegame in which they would like to fight their opponents.

In this second volume of “Chess Middlegame Strategies” Sokolov focusses on this connection between the opening and the middlegame. He has selected different themes from popular openings and examined the resulting middlegames, trying to offer a sort of user manual to guide readers through these middlegames. He also offers some ideas on the theory of the different openings.

The 30 games in this book cover a wide range of different middlegame types, so there is something for everyone. Studying this book will enhance readers’ understanding of middlegame strategies. Only one chapter in this book, “Knight Tales”, is not related to a particular opening. It concentrates on the middlegame theme of knights versus bishops.

Ivan Sokolov was born in Bosnia in 1968. He was and still is one of the most flamboyant attacking players of his time, reaching several times, over a period of 13 years, the top 12 spot in the FIDE ranking. He notably has beaten world chess champions like Smyslov, Kasparov, Kramnik, Anand and Topalov. We remember him winning most recent the World Open in Philadelphia 2012 and the gold medal for best performance at the 'European Teams'in Warsaw 2013.