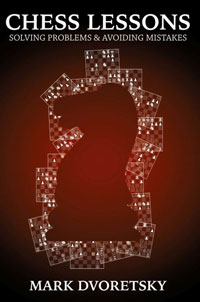 “Success is a collection of problems solved.” – I.M. Pei, Architect

In this, his penultimate work, legendary chess instructor Mark Dvoretsky (1947-2016) explores identifying and dealing with problems on the chessboard.

“While working on the games that I have included in this book, I have sought to uncover their core ideas which are important for a chessplayer’s improvement and demonstrate them as vividly as possible. Those may include both approaches to playing out certain typical situations and mastering various positional and tactical ideas, as well as improving technical skills and training an ability to search for decisions and to make them on the basis of the precise calculation of variations.

“The last two parts of the book are devoted to the specific forms of training that I routinely use during my lessons: analysis of games in the form of solving a string of consecutive tasks and playing out of certain specially selected positions.

“I hope that this book will be of help not only to high-ranking players at whom it is primarily aimed, but also to every reader who is serious about self-improvement and wishes to understand problems that grandmasters and masters face over the board and the ways they solve them; what are the reasons for errors they sometimes commit and how to avoid those mistakes.”

– Mark Dvoretsky, from his Foreword

Mark Dvoretsky is considered by many the premier chess instructor of our era. His works on the middlegame and endgame have set the standard by which other chess books are measured.