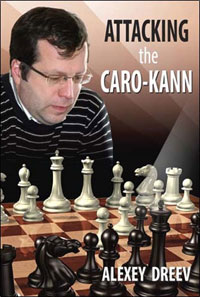 The advanced variation of the Caro-Kann Defence is a very good alternative to the classical variation 1.e4 ?6 2.d4 d5 3.Nd2 (or 3.Nc3) dxe4 4.Nxe4 Bf5 (4...Nd7). The theory after 3.e5 has developed extensively nowadays too; nevertheless, the positions of the advanced variation are considerably less studied than those in the classical lines, in which there is much less practical fight and much more a comparison of thorough theoretical erudition.
“My long-term experience in playing the Caro-Kann Defence with Black has shown to me that his problems in this variation are not easy to solve at all. The variation we analyse in this book often leads to non-standard situations on the board, so I would recommend it to players who are inclined to enter complicated and unusual positions and who hope to seize the initiative and to maintain it skilfully.” – writes Dreev.