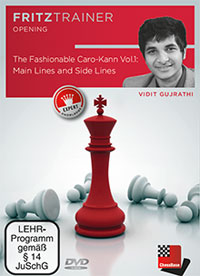 The Caro Kann is a very tricky opening. Black’s play is based on controlling and fighting for key light squares. It is a line which was very fashionable in late 90s and early 2000s due to the successes of greats like Karpov, Anand, Dreev etc. Recently due to strong engines lot of key developments have been made and some new lines have been introduced, while others have been refuted altogether. I have analyzed the new trends carefully and found some new ideas for Black. The dynamic play based on a strong strategic foundation has always fascinated me, and in these DVDs I have suggested the lines which I personally prefer and employ in practice. Recently at the World Rapid and Blitz Championships at Qatar I used many of them with great success, managing to score important wins over top GMsVachier Lagrave, Radjabov, Jobava and drawing against Vishy Anand. I am sure you will learn a lot about the opening and will enjoy the battle for the light squares.