The Basics of Winning Chess Vol. 2 - Technique is everything! 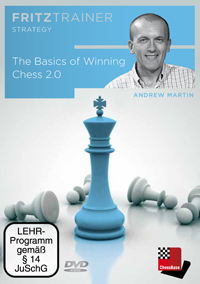 The Basics of Winning Chess Vol. 2 - Technique is everything!

En inglés.
In this DVD Andrew Martin, experienced coach and International Master, shows you how. Andrew Martin about this DVD: “It has been ten years since the first ‘Basics of Winning Chess’ was released and so I thought it was time to revisit this project. After all, chess has changed dramatically over the last decade and standards seem higher than ever. We must attempt to keep up! It is often said that the strongest players operate like machines. Once they get a winning position, they win it. From a certain point in the game they seem to be able to play on autopilot. So on this DVD let us try to trace the development of technique, almost from scratch to master level, so that we may develop these skills to the best of our ability.“ „Version 2.0 draws extensively from modern chess practice. Virtually all the games are instructive and of high quality. Nearly all are from recent times and many have notes, which you may use for extra study. It gives you a roadmap for improvement. The DVD will be particularly useful for players within the rating band 1200-2200. It is a tour of the modern game.”
• Video running time: 6 h 06 min (English)
• With interactive training including video feedback
• Exclusive training database withmany annotated games by Andrew Martin
• Including ChessBase Reader
FIDE Senior Trainer and IM Andrew Martin has recorded extensively for ChessBase since 2004