Learning from the world champions (Tiviakov) 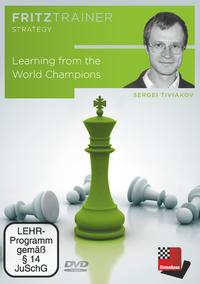 Learning from the world champions (Tiviakov)

From amateurs to professionals – players of all levels know how difficult it is to learn chess strategy and how much time and effort it takes to improve middlegame play. The author of this DVD has a solution - suggesting and demonstrating what he believes to be the easiest and most affordable method - learning from the World Champions! With famous classical examples from the works of the giants, the author talks in detail about principles of chess and methods of play that we can use during every stage of the game. Each example of World Champion play is followed by a similar example from the practice of the author, proving that his method works! A great deal of incredibly useful aspects are discussed and lot of tips offered on how to improve your play in 25 examples with 5 hours of video.
• Video running time: 5 h 45 min (English)
• With interactive training including video feedback
• Extra: Database with 50 model games from World Champions
• Including CB 12 Reader
Born 1973 in Krasnodar (Soviet Union), Sergei Tiviakov was a member of the Smyslov school and gained the titles of World Youth Champion at U16 and U18 levels. 1994 he represented Russia in the Chess Olympiads. Since 1997 Tiviakov has been living in Groningen (Netherlands). With his new home country he won the title in the European Teams Championships in both 2001 and 2005 and was victorious in the championship of the Netherlands in 2006 and 2007. Tiviakov celebrated his biggest success in 2008 when he won the European Individual Chess Championship.
System requirements: Minimum: Pentium III 1 GHz, 1 GB RAM, Windows Vista, XP (Service Pack 3), DirectX9 graphic card with 256 MB RAM, DVD-ROM drive, Windows Media Player 9 and internet connection for program activation. Recommended: PC Intel Core i7, 2.8 GHz, 4 GB RAM, Windows 8.1 or Windows 10, DirectX10 graphic card (or compatible) with 512 MB RAM or better, 100% DirectX10 compatible sound card, Windows Media Player 11, DVD-ROM drive and internet connection for program activation.