DVD My best games in the Nimzo-Indian (Shirov) Fritztrainer 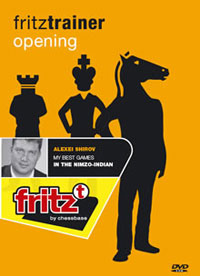 DVD My best games in the Nimzo-Indian (Shirov) Fritztrainer

With this DVD on the Nimzo-Indian Defence (including the Catalan and the Queen‘s Indian) Alexei Shirov continues the successful and highly praised series about his best games. As in the preceding DVDs the Latvian super grandmaster succeeds in spoiling his public with analysis of a high quality and with exciting insights into his games, and he does so in his own reserved, pleasant and modest style. The DVD concentrates on the Classical Nimzo-Indian with 4.Qc2. But when playing against the very solid Nimzo-Indian, which the author faced most often as White, it is enormously important to be able to vary your opening lines and so the author himself often switches to 3.Nf3; this then leads to games with 3.b6 (Queen‘s Indian) or 3.d5 4.g3 (Catalan). Amongst the opponents in the games he presents are, for example, Topalov and Leko. Video running time: over 4 hours.

Alexei Shirov was born in Riga just like world champion Mihail Tal, and also his playing style reminds many chess fans of the young Tal. In the beginning of the 90ies, a comet-like rise brought the young Latvian to the world top within the shortest of time. Being no older than 22 years, he already had an Elo rating of nearly 2750 and belonged to the absolute elite. Since then Shirov has been one of the best players in the world, delighting all chess fans with original and amazing ideas on the board.