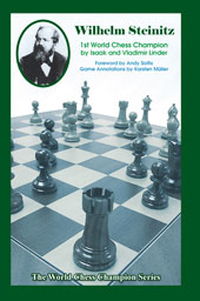 The first official world champion, Wilhelm Steinitz was a towering figure in the chess world in the last quarter of the 19th century. For nearly three decades, he never lost a serious match.

His opening innovations have resonated for more than a century. For example, for those who do not wish to meet the Ruy Lopez with 3...a6, the Steinitz Defense, 3...d6, may still be one of the best ways to meet the “Spanish Torture.”

In the early 1870s, he formulated a positional approach that served as the foundation of modern chess. And his pioneering work on chess theory has been a major, enduring influence since it was postulated.

Moreover, if we think of his achievements as a writer, not just as a player, Steinitz was unique. Few authors before or since even come close. And none of his great successors could match his versatility and output.

Isaak Linder is regarded as one of the pre-eminent chess historians of the modern era. He is the author of many books, including the widely acclaimed books in the World Chess Champions Series.