The world champions I knew 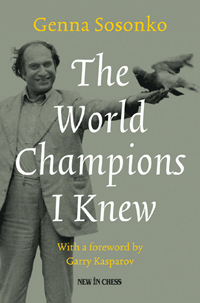 The world champions I knew

‘At the time Botvinnik was the personification of chess in the Soviet Union – river: Volga,
poet: Mayakovsky, goalkeeper: Yashin, chess player: Botvinnik. And suddenly – a kid with a name as short as a gunshot: Tal!’

Genna Sosonko’s riveting portrait of Mikhail Tal, the Magician from Riga who to this day mesmerizes chess fans all over the world, bears all the hallmarks of the author’s inimitable writing.

Few – if any – knew ‘Misha’ as well as his good friend and training partner. Here you see the real Tal: nonchalant genius, charming wit, womanizer, cult hero and drug addict. Mikhail Tal is only one of the chess greats that Sosonko brings to life in this collection of his best writings on World Champions.

Two of them lived before his time: his story of Alexander Alekhine is based on fresh research; his intriguing portrait of José Raúl Capablanca followed unforgettable encounters with Capa’s widow Olga.

Genna Sosonko got to know the other champions described here through his extensive travels as a chess pro. Countless hours of private conversation form the basis of his unique portraits of Max Euwe, Mikhail Botvinnik,Vasily Smyslov and Tigran Petrosian.

Genna Sosonko was born in Leningrad,where he was a leading chess trainer. Following his emigration from the Soviet Union in 1972 he settled in The Netherlands, later becoming a world class player.

After his active career, he discovered a passion for writing that resulted in widely acclaimed books in which he masterfully combines an insider’s nostalgia with the detachment of a critical observer.