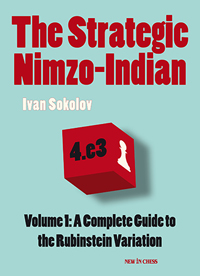 The Nimzo-Indian Defence continues to be one of the most important chess openings, both at club level and with top players. In recent years it has undergone a number of significant changes and it’s high time for a thorough look at the current state of affairs.

Top grandmaster Ivan Sokolov is the perfect authority to do so.

The Strategic Nimzo-Indian: A Complete Guide to the Rubinstein Variation is the first of a two-part series. In this ground-breaking and clearly structured first volume, Sokolov investigates all lines after the move 4.e3. Volume 2 will be about 4.a3, the Sämisch Variation.

Inspired by great masters like Mikhail Botvinnik, Ivan Sokolov has played the Rubinstein Variation all his life, and he has even beaten World Champion Garry Kasparov with it.

Although play can become very sharp, the Nimzo-Indian requires a profound positional understanding. Ivan Sokolov does not simply give variations, but provides clear explanations of the structures and plans in the various branches, and presents new ideas and resources for both Black and White.

Each chapter ends with a summary containing key strategic and tactical advice.

Ivan Sokolov is a top grandmaster who was born in Bosnia in 1968. He was Yugoslav champion in 1988 and Dutch champion in 1995 and 1998. He rose to the number 12 spot in the FIDE world rankings. In his rich career Sokolov has beaten world chess champions like Garry Kasparov, Vladimir Kramnik and Viswanathan Anand.