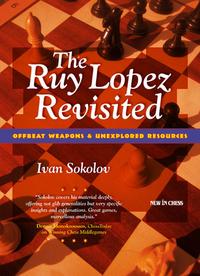 The Ruy Lopez (or Spanish Opening) is one of the most important and oldest chess openings, forever popular with amateurs aswell as professional players. In this ground-breaking book, one of today's greatest Ruyu Loez expertes, Ivan Sokolov, presents a practical opening guide with a wide repertoire for black players who want to play for a win.

Te Ruy Lopez Revisited contains in depth but highly accessible analysis of the Jaenisch Gambit, the Delayed Jaenisch, teh Cozio Variation, the Smyslov Variation, the Bird Variation and the Classical Variation.

The lines Sokolov presents are always dynamic and sometimes quite offbeat. Byt ha has played most of them himself on numerous occasions, even against the strongest opponents. Many of these lines turn out to be stronger than their reputation suggests, but Sokolov always remains an objective analyst. As well as numerous improvements for Black, the book also contains some crushing novelties for White!

- Great practical weapons against one of the most widely played chess openings
- Authored by a famous top grandmaster
- Written in an accessible, down to earth style
- Full of original ideas

Ivan Sokolov is a top grarndmaster who was born in Bosnia in 1968. He wa Yugoslav campion in 1988 and Dutch champion in 1995 and 1998. In his rich career Sokolov has beaten world chess champions like Garry Kasparov, Vladimir Kramnik as well as Viswanathan Anand.