The Pirc in black & white 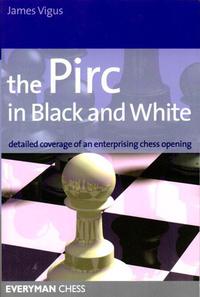 The Pirc in black & white

The Pirc is an ambitious counter-attacking response to White’s most popular opening move, 1 e4. Black’s philosophy is based around allowing White to build a large and impressive-looking pawn centre, only to plot its downfall by attacking it with pieces or timely pawn strikes. When it works, the results can be spectacular, but of course this method of play carries with it some danger; if Black is not careful he runs the risk of simply being swamped in the centre. Such a provocative approach has found favour witha line of uncompromising Grandmasters including former Soviet Champion Alexander Beliavsky and Mikhail Gurevich.

In this book James Vigus provides an up-to-date appraisal of the Pirc and its many variations. Using illustrative games, he examines the traditional main lines, the fashionable alternatives and the tricky sidelines,while outlining the typical tactical and positional ideas for both White and Black. A study of this book will allow the reader to begin playing the Pirc with confidence in his or her own games.

Dr James Vigus is a FIDE Master and a former British Junior Champion. His first book for Everyman Chess, The Pirc in Black and White, was hailed by reviewers as an outstanding work.