The Petrosian system against the QID 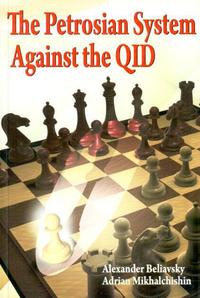 The Petrosian system against the QID

The book deals with a reliable and interesting system (1 d4 Nf6 2 c4 e6 3 Nf3 b6 4 a3) which has been played by most of the world’s elite, starting with ex-world champion Tigran Petrosian. It is not a repertoire book though. Beliavsky & Mikhalchishin present an objective work which discusses the possibilities of both sides.

White's main strategic goal in this system is to build a perfect pawn centre and then organise a kingside attack. Such an approach is much more natural than the modern fianchetto systems against the Queen’s Indian Defence. Database statistics seem to confirm that, as White is scoring better with 4.a3 than with 4.g3.

The authors’ own practical experience shows that they feel comfortably in the Petrosian system with any colour. They are especially effective with White and have not allowed a single loss in 27 years.

The structure of this book is similar to other recent Chess Stars publications. Every part starts with a “Main Ideas” section that explains the major plans and typical positions which are then ana­lysed in the “Move by Move” chapters. The book will be interesting to a wide range of players who enter QID positions as White or Black.

The book is a nice mix of technical analysis and verbal explanations making it accessable to players of different levels.