The art of the endgame

My journeys in the magical world of endgame studies 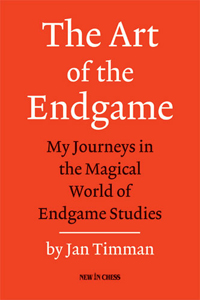 The art of the endgame

My journeys in the magical world of endgame studies

All through his career Jan Timman has been captivated by the mystery and splendour of endgame studies. Even during his most successful and busy years as a world class player, Timman continued to compose studies and admire those of others.

For him there has never been any doubt that the journeys in this magical world helped him to grow as a player.

In this fascinating book, Timman has collected a wide range of the finest endgame studies by other composers and explains in his lucid style how they inspired him to create dozens of brand-new studies himself.

As Timman writes in the preface: ‘Never before have I been so productive as an endgame study composer as in the seven months that I wrote this book. It was a sensational experience.’

The Art of the Endgame is a treasure-trove for the lovers of beauty in chess. But it is also of great value for competitive players. Solving endgame studies is a vital part of improving one’s endgame technique: it develops general understanding, calculation skills and resourcefulness.

Jan Timman is a former world championship candidate who rose to the number two spot of the FIDE world rankings. He is the author of several highly acclaimed bestsellers, such as 'Curacao 1962', 'On the Attack!', and 'Power Chess with Pieces'.