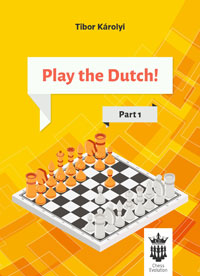 The Dutch defense is a highly popular opening nowadays with the idea to get a sharp and assymetrical position against 1.d4.

GM Mateusz Bartel - 4-times Polish Champion:
"Are you bored with the classical or popular positions after 1.d4? Are the tonnes of theoretical lines overwhelming for you sometimes? Then you should try the Dutch Defence instead!
In this book, a well-respected author provides you with a solid foundation for including the Dutch in your repertoire, dealing with almost all the sidelines you could possibly meet after 1. d4 f5. I have been playing this opening for more than 20 years now and I am positively surprised by the amount of useful material inside. Studying it (and later the second part with the main lines) can help you to acquire a lifetime weapon, which is especially efficient against solid players."

Together with the second part, the book gives the reader a full Dutch repertoire with black.