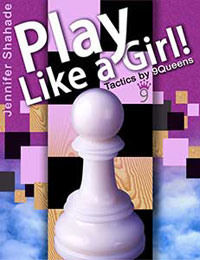 If you think that “playing like a girl” implies a timid, passive approach to chess, you’re in for a big surprise! Jennifer Shahade showcases the slash-and-burn style of fifteen women, past and present, who – much to their opponents’ chagrin – mastered the violent art of tactics.

An international constellation of feminine chess stars – from Women’s World Champion Alexandra Kosteniuk of Russia to the American Abby Marshall and China’s teen prodigy Hou Yifan – headlines this collection of 322 combinations, classified by theme and ordered by level of difficulty, and all carried out by women players

Play Like A Girl!, the first book of its kind, is a collection of tactical positions from the world’s best women chessplayers. Profiled players range from Hungary’s Judit Polgar, the best woman chessplayer in history, to Abby Marshall, the teenager who became the first American girl to win the Denker High School Tournament of Champions.

Chess lovers of all levels can enjoy the puzzles, as the difficulty goes all the way from one-move killer blows to deep, complex combinations. The crushing tactics in this book show that “playing like a girl” is something to aspire to!

When you purchase Play Like a Girl!, you're also helping charity. All author royalties go to the Tucson-based non-profit organization, 9Queens. The book is edited by two-time U.S. Women's Champion Jennifer Shahade, a co-founder of 9Queens.
About the Author

Jennifer Shahade is a two-time U.S. Women's Champion and a Woman Grandmaster. Jennifer is the author of Chess Bitch: Women in the Ultimate Intellectual Sport, which profiles the lives of many of the players featured in this book; and co-author of Marcel Duchamp: The Art of Chess. In 2005, Shahade and Jean Hoffman co-founded 9 Queens (http://9queens.org), a non-profit organization that promotes chess in those who are most in need of its benefits.

Shahade is editor of the official website of the U.S. Chess Federation, http://uschess.org. A resident of Philadelphia, she also maintains a personal website at http://jennifershahade.com.