OFERTA: A Spanish repertoire for black 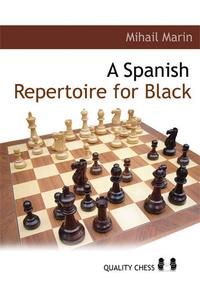 OFERTA: A Spanish repertoire for black

This is the sequel to Marin's successful "Beating the Open Games", in which the author dealt with all white's options up to 3.Bb5. Now Marin provides all the answers for Black after 4.Ba4 in great depth. Some quotes from the foreword will give you an idea of the concept and contents of this remarkable opening book:

--"...I have put strong emphasis on the notion of development, which offers the most reliable guidelines in any open games. It is easier and more constructive to follow just a few general recommendations about development than remember a large mess of variations."

-- about the structure of his book: "The introductory part deals with the general aspects as well as with the historical evolution of the variation. The theoretical section contains detailed analysis, which aims to be one or two steps ahead of the current stage of theory." (!!)

-- again, about the structure, that has the book start with the main variation and finish with sidelines, contrary to other opening books: "The main line is by far the most complex from a strategic point of view. Once its basics have been assimilated, the other variations become easier to understand."

The remaining chapters deal with earlier deviations, from black's point of view, going back all the way to 5.d4 and 5.Nc3.

This depth of chess expertise has rarely been published for a mass audience before, as grandmasters usually prefer to keep their secrets. The complexity of the material could have been daunting, but Marin is also a master of explaining profound ideas to a wide audience.