Mannheim 1914 and the Interned Russians 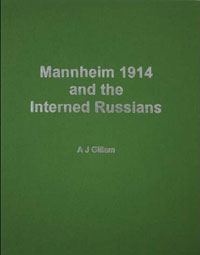 Mannheim 1914 and the Interned Russians

This is one of the strangest stories in modern chess and it is has now been researched and recounted for the first time.

Gillam presents 94 games (the other 5 are lost) from the Masters’ Tournament at Mannheim which was broken off when World War 1 began, with extensive notes.

Almost half the book, more than 250 pages, tells the full story of what happened when the tournament was broken off - a story never told before of the arrests, internments, the ones that got away.

In early August 1914 there were 12 Russians left in Mannheim facing internment and by mid-1918 just 4 were left in Germany and only 2 were ‘free’ and still playing chess. The book explains how and why.

The author has attempted to follow all 40 Russians who were at Mannheim playing, reporting and spectating and to tell their stories. Alekhine’s story has some surprises!

This book presents also 90 games from the lower sections (all that are known), many never published before, many with notes.

And 103 games from the tournaments played by the interned players in Baden Baden and Triberg, plus other games played in consultation, in matches and by correspondence. All the available games (about 143), many with notes.