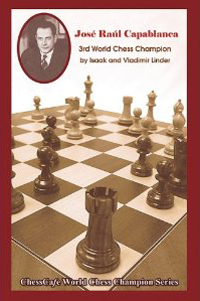 The name of Jose Raul Capablanca (1888-1942), the third world champion, is indelibly inscribed in the annals of chess history. Capablanca's technique, intuition, remarkably quick calculation, and sense for elegant combinations made him the paragon of grandmasters during his lifetime. At the peak of his career Capablanca was almost invincible; each of his losses was regarded as a sensation. His books, articles, and lucid annotations became instant classics.

As a star of the first magnitude, Capablanca continues to influence the world of chess. All the world champions of the late 20th century - Botvinnik, Smyslov, Tal, Petrosian, Spassky, Fischer, Karpov, and Kasparov - have been influenced by Capablanca's original ideas.

Join Russian chess historians Isaak and Vladimir Linder as they take you on a journey exploring the life and games of the great Cuban world chess champion.

Isaak Linder is regarded as one of the pre-eminent chess historians of the modern era. He is the author of many books, including the widely acclaimed books in the World Chess Champion Series