Is Your Move Safe? 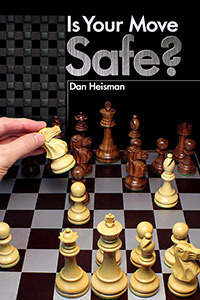 Is Your Move Safe?

Safety first! Success in chess begins with asking yourself the basic question, “Is the move that I’m considering a safe one?”

The question may sound simple, but answering it is not so simple. National Master and award-winning chess instructor Dan Heisman has carefully selected more than 150 theoretical and tournament positions to show how a move may look safe but isn’t, or how it can appear risky and still be the safest option on the board.

Traditional tactics books tell you that your opponent's position is not safe, suggesting that as the player to move in the puzzle you can win material or deliver checkmate. Is Your Move Safe? concentrates instead on helping you to make sure that your opponent won’t have any such tactics to find! Ranging from fairly easy to very difficult, the multiple-choice puzzles in this book will challenge most players from low intermediate to strong master. The answers are not all clear-cut – many of them are extensively analyzed and will have you digging deeply into the position.

If you want a practical book to improve your ability to choose your moves, Is Your Move Safe? is just what you’ve been looking for!

Dan Heisman has been a full-time chess instructor since 1996. His “Novice Nook” column at Chess Café has received numerous annual awards for Best Instruction from the Chess Journalists of America. His video series, “Improve Your Chess,” appears weekly on the Internet Chess Club, where previously he also hosted the radio show, “Ask the Renaissance Man.”. The 1973 Philadelphia Invitational Champion, Dan played on Penn State’s winning team at the 1972 U.S. Amateur Team Championship. This is Dan’s twelfth chess book.