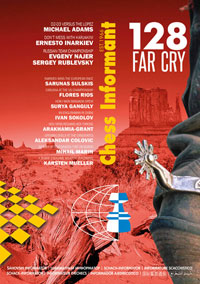 DON'T MESS WITH KARJAKIN!
2016 European champion GM Ernesto Inakiev not only answers the question "What has been demonstrated by Karjakin that could not have been done by others?" but also reveals Sergey's secret weapons at the Moscow Candidates’ tournament.
WINNING THE EUROPEAN IN THE OUTSIDE LANE!
GM Sarunas Sulskis dissects two key games that cleared the path to victory for Ernesto Inarkiev and lays bare the tension, strategy, pre-game preparations, stamina, determination and all the other elements essential for modern combative chess where the stakes are high. In addition, Sulskis annotates a fascinating game by the title defender, Evgeny Najer.
D2-D3 VERSUS THE LOPEZ
GM Michael Adams shares his views on what has recently become a very popular setup against Ruy Lopez – that is facing from both sides of the board. Funnily enough, Michael never expected to have played this one and the same opening in four consecutive games in German Bundesliga.
CARUANA'S PATH TO VICTORY AT THE US CHAMPIONSHIP
Chilean GM Mauricio Flores Rios presents 8 thoroughly examined games from the strongest ever US Championship plus a gem of a game from the Ultimate Blitz Challenge that will grip the reader's attention. Fabiano Caruana performed in an absolutely convincing fashion and can now with full justification be regarded as the best player in America.
HOW I WON THE BANGKOK OPEN!
India's GM Surya Ganguly reveals the inside track about the road to victory to Bangkok Open. Amazingly, he was also able to follow what was happening on other boards and pick out the most creative games.
AN ENGLISHMAN IN DUBAI
GM Ivan Sokolov highlights the most interesting games from the 18th Dubai Open, one of the strongest open tournaments in the world. Sokolov was playing in the event, but the emphasis is on English GM Gawain Jones who deployed an exquisite and little known idea in the key game that brought him tournament victory.
HOU YIFAN REGAINS HER THRONE
GM Ketevan Arakhamia-Grant guides us through the Women's World Championship match held in Lvov. Also very much to the point are Kety's views about the future of Hou Yifan and whether she can be compared with Judit Polgar.
WHERE 13 OUT OF RUSSIA'S 14 TOP PLAYERS COMPETED
The 2015 European champion, GM Evgeny Najer, presents a selection of extremely interesting games and game fragments from Russian Team Championship, a superb team competition played in Sochi, and offers readers some rare insights into from the Russian national team training camp held just before this event!
GM Sergey Rublevsky adds a very important theoretical game where his homework proved decisive and allowed him to cruise effortlessly to victory.
SICILIAN SCHEVENINGEN: FIRE ON BOARD
"Old Wine In New Bottles" is our regular column from Romanian GM Mihail Marin. This time he was inspired by a recent game of Liviu-Dieter Nisipeanu played in the 2016 European championship. Going back through chess history, Marin brings back memories of one of the greatest Sicilian attacking players of the second half of 20th century - legendary Serbian GM Dragoljub Velimirovic, whose original and highly creative ideas were dubbed to "fire on board".
A SHARP ENDGAME WEAPON: ZUGZWANG
With few pieces on the board, a problem often arises once they achieve their optimal placement. The author GM Karsten Mueller put it nicely: "If a player could just pass, as in the game of Go, then even king and rook could not win against a lone king." This selection of 12 examples is divided into five categories and all but one are from the most recent tournaments played worldwide.
AND LOTS MORE!