G. Kasparov on my great predecessors I 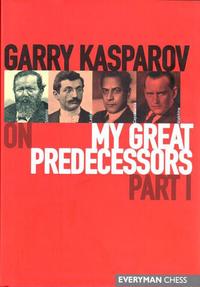 G. Kasparov on my great predecessors I

The battle for the World Chess Championship has witnessed numerous titanic struggles which have engaged the interest not only of chess enthusiasts but also of the public at large. The chessboard is the ultimate mental battleground and the world champions themselves are supreme intellectual gladiators.

These magnificent compilations of chess form the basis of the first two parts of Garry Kasparov's definitive history of the World Chess Championship. Garry Kasparov, who is universally acclaimed as the greatest chessplayer ever, subjects the play of his predecessors to a rigorous analysis.