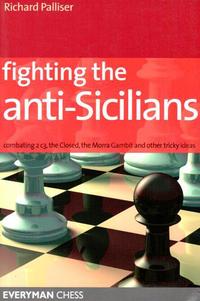 The Sicilian Defence is by far Black's most popular answer to 1 e4 at all levels of chess. The reason for this is easy to understand: from the very first move Black unbalances the position and can play for a win without needing to take unjustified risks. This is particularly the case with the Open Sicilian, where Black can take comfort from the knowledge that his superior pawn structure ensures control of the centre and excellent long-term chances.

Faced with this problem, along with the fact that Open Sicilians generally carry a massive build-up of theory, it's unsurprising that many White players prefer to play one of the various 'Anti-Sicilian' lines on offer. These numerous alternatives to 2 Nf3 include the primitive but dangerous Grand Prix Attack, one or two wild gambits, and also some tedious and niggling variations such as 2 c3 and the Closed Sicilian, which are designed to stamp out any fun Black was envisaging when playing 1...c5.

These annoying lines have become the scourge of Sicilian players, but in this book Richard Palliser, a lifelong Sicilian devotee, decides it's time for Black players to finally fight back! Drawing upon his vast experience and understanding of Anti-Sicilians, Palliser creates a dynamic and practical repertoire for Sicilian players to use against these possibilities. In many instances he offers more than one solution for Black - ambitious or solid - and he pays special attention to tricky move orders, weapons that present-day players are likely to use.

Richard Palliser
Richard Palliser is an International Master with numerous tournament successes to his name, and in 2006 he became Joint British Rapidplay Champion. He has already established a reputation as a skilled and prolific chess writer.