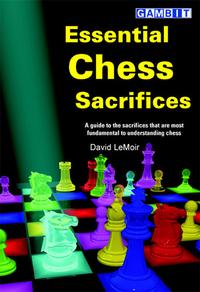 Sacrifices are an essential part of chess. Those who never consider sacrificing will miss countless opportunities and find that promising positions repeatedly slip away. Players who do not appreciate their opponents' sacrificial possibilities will be unable to see danger signs, and find themselves on the wrong end of too many king-hunts. Rather than merely cataloguing the various possibilities and providing examples, LeMoir discusses the possible follow-ups to the sacrifices, the defensive options against them, and the positional factors that might suggest whether the sacrifice will be sound or unsound. There are many important types of chess positions that can only be played well by those who understand the thematic sacrifices that are possible.

David LeMoir is an experienced chess-player and writer. He twice won the championship of the West of England and was runner-up on four occasions. In 2000, he was champion of the English county of Norfolk. In a successful career as a business strategy consultant, he has made good use of the strategic and decision-making skills that are developed by playing chess. He has earned a reputation for writing chess books that discuss important practical chess topics with great clarity.