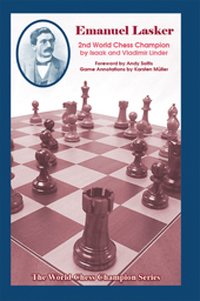 Emanuel Lasker was a great chess fighter, thinker and researcher. He was possessed of gigantic playing strength, retaining the title of World's Number One Chessplayer for 27(!) years. Even after losing his crown, he kept his ability for a long time, as shown by his victories and prize-winning finishes in immensely powerful international tournaments when he was 54 (Moravska-Ostrava 1923), 55 (New York 1924), 56 (Moscow 1925), and even at 66 (Moscow 1935)!

One of the chief postulates of the Second World Champion was the battle of honor. "On the chessboard, lies and dishonesty have no place." These words of Lasker could serve, even today, as an example to every young chessplayer of how to relate to the Great Game.

Emanuel Lasker was the first in history to achieve a universal style. This was a Style of the Future, which is why the Second World Champion would not be understood by many of his contemporaries, who believed that he had no "style" at all.

Lasker's games of chess, like his entire chess legacy, will live forever!

American grandmaster Andy Soltis provides insight into the great champion with his Foreword, while all the games and game fragments have been annotated especially for this volume by German grandmaster Karsten Mueller.

Join Russian chess historians Isaak and Vladimir Linder as they take you on a journey exploring the life and games of the great world champion Emanuel Lasker.

"The authors do an admirable job of presenting the life of Lasker in words, games and pictures. There are 82 illustrative games (some are fragments) and they have new notes, provided by Karsten Mueller. I am really enjoying this [World Chess Champions] series and am very much looking forward to reading the next volume. This is, in my opinion, definitely the best English-language book on the life of the Second World Champion." - Sean Marsh, marshtowers.com

Isaak Linder is regarded as one of the pre-eminent chess historians of the modern era. He is the author of many books, including the widely acclaimed books in the World Chess Champion Series.